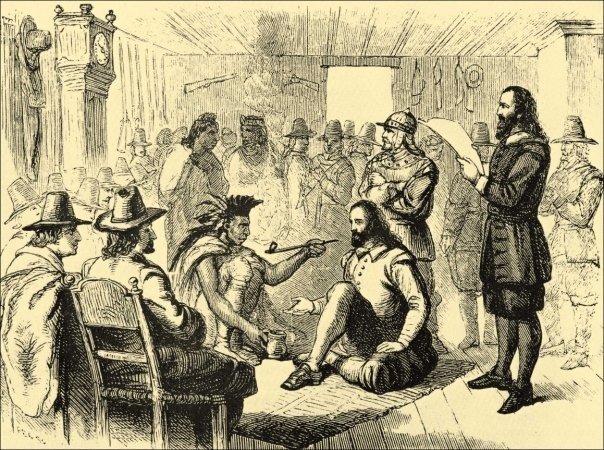 A look into the lives of the individuals of The first Thanksgiving.

When I first began to learn about the Pilgrims and the Native Americans who were joined together in the first Thanksgiving, I was utterly shocked. Their stories are so epic, so stirring and so poignant. Miracles marked every turn of their pilgrimage, and the sovereignty of God revealed his perfect plan for their colony and the tribes of the Massachusetts Bay area. The primary resources such as journals and personal letters detail the incredible adventure they were a part of, and the supernatural works that God did in the small band of brothers and sisters. These true stories have been far removed from the minds of the current American public. The remarkable stories have been characterized and distilled down to cartoony myths and tall tales. The true humanity has been all but erased from the hearts of Americans who need to remember their roots, now more than ever!

My attempt, over the next few days will be to open up your eyes to a whole “new world” that was being discovered almost 400 years ago. I will provide you a plethora of links to primary resources where you and your family can discover what many have forgotten, concerning The first Thanksgiving.

Today’s primary resource is a letter written to the pilgrims by their friend and pastor, John Robinson. You will see, from this correspondence, how their attitudes and hearts were guided and directed by the relationship truths in God’s Word. This made a great impact on the success of the colony and ultimately on the future of the United States of America.

The pilgrims’ lives truly were lived in sacrifice without complaining, as was their trademark. They were living in the New World before it was famous for “first world problems”. As I poured through their journals and writings, I was gripped with an extreme conviction. Their hard work ethic, their fellowship and unity, their faithfulness, their lack of complaining paints a stark contrast to the world that I live in.  The men, women and children who left everything to come to The New World were following what they believed was the strong and direct will of The Lord for their lives. They were refugees in every sense of the word, yet they lived in confident knowledge that the King of Kings was their father and protector.

The pilgrims, as we know them by name, were intent on following Jesus Christ in everything, including in their attitudes towards one another and towards outsiders. When you study the complete failings of the early years of the colony at Jamestown, you may wonder how The Pilgrims did not suffer the same fate. They would say it has more to do with faith than fate. Jamestown had an “every man for himself” attitude. The settlers there were more concerned with gold than planting food and the gentlemen believed they were too good to work. Jamestown also dealt harshly and dishonestly with the Native Peoples. The Pilgrims, from all of their writings, were very focused on treating the Natives with respect and to work together in peace.

I have included, for your own examination, a sermon by their dear friend and pastor John Robinson. Robinson was a fervent defender of the gospel and the Word of God. He did not go to Plymouth Colony, but stayed behind to shepherd the separatist flock in Holland. Because they lived in 1620, you will probably need to have mastered above a 6th grade reading level to digest this beautiful letter. Think Shakespeare. They were contemporaries.

Loving and Christian friends, I do heartily and in the Lord salute you all, as being they with whom I am present in my best affection, and most earnest longings after you, though I be constrained for awhile to be bodily absent from you, I say constrained, God knowing how willingly and much rather than otherwise I would have borne my part with you in this first brunt, were I not by strong necessity held back for the present. Make account of me in the meanwhile, as of a man divided in myself with great pain, and as (natural bonds set aside) having my better part with you. And though I doubt not but in your godly wisdoms you both foresee and resolve upon that which concerneth your present state and condition both severally and jointly, yet have I thought but my duty to add some further spur of provocation unto them who run already, if not because you need it, yet because I owe it in love and duty.

And first, as we are daily to renew our repentance with our God, special for our sins known, and general for our unknown trespasses; so doth the Lord call us in a singular manner upon occasions of such difficulty and danger as lieth upon you, to a both more narrow search and careful reformation of our ways in His sight, lest He calling to remembrance our sins forgotten by us or unrepented of, take advantage against us, and in judgment leave us for the same to be swallowed up in one danger or other; whereas on the contrary, sin being taken away by earnest repentance and the pardon thereof from the Lord, sealed up unto a man’s conscience by His Spirit, great shall be his security and peace in all dangers, sweet his comforts in all distresses, with happy deliverance from all evil, whether in life or in death.

Now next after this heavenly peace with God and our own consciences, we are carefully to provide for peace with all men what in us lieth, especially with our associates, and for that end watchfulness must be had, that we neither at all in ourselves do give, no nor easily take offense being given by others. Woe be unto the world for offenses, for though it be necessary (considering the malice of Satan and man’s corruption) that offenses come, yet woe unto the man or woman either by whom the offense cometh, saith Christ, Math. 18:7. And if offenses in the unseasonable use of things in themselves indifferent, be more to the feared than death itself, as the Apostle teacheth, 1 Cor. 9:15, how much more in things simply evil, in which neither honor of God nor love of man is thought worthy to be regarded.

Neither yet is it sufficient that we keep ourselves by the grace of God from giving offense, except withal we be armed against the taking of them when they be given by others. For how unperfect and lame is the work of grace in that person who wants charity to cover a multitude of offenses, as the Scriptures speak. Neither are you to be exhorted to this grace only upon the common grounds of Christianity, which are, that persons ready to take offense, either want charity to cover offenses, or wisdom duly to weigh human frailty; or lastly are gross, though close hypocrites, as Christ our Lord teacheth, Math. 7:1,2,3, as indeed in mine own experience, few or none have been found which sooner give offense, than such as easily take it; neither have they ever proved sound and profitable members in societies, which have nourished in themselves that touchy humor. But besides these, there are divers special motives provoking you above others to great care and conscience this way: as first, you are many of you strangers, as to the persons, so to the infirmities one of another, and so stand in need of more watchfulness this way, lest when such things fall out in men and women as you suspected not, you be inordinately affected with

them; which doth require at your hands much wisdom and charity for the covering and preventing of incident offenses that way. And lastly your intended course of civil community will minister continual occasion of offense, and will be as fuel for that fire, except you diligently quench it with brotherly forbearance. And if taking of offense causelessly or easily at men’s doings be so carefully to be avoided, how much more heed is to be taken that we take not offense at God Himself, which yet we certainly do so oft as we do murmur at His providence in our crosses, or bear impatiently such afflictions as wherewith He pleaseth to visit us. Store we up therefore patience against that evil day, without which we take offense at the Lord Himself in His holy and just works.

A fourth thing there is carefully to be provided for, to wit, that with your common employments you join common affections truly bent upon the general good, avoiding as a deadly plague of your both common and special comfort all retiredness of mind for proper advantage, and all singularly affected any manner of way; let every man repress in himself and the whole body in each person, as so many rebels against the common good, all private respects of men’s selves, not sorting with the general conveniency. And as men are careful not to have a new house shaken with any violence before it be well settled and the parts firmly knit: so be you, I beseech you brethren, much more careful, that the house of God which you are and are to be, be not shaken with unnecessary novelties or other oppositions at the first settling thereof.

Lastly, whereas you are to become a body politic, using amongst yourselves civil government, and are not furnished with any persons of special eminency above the rest, to be chosen by you into office of government: let your wisdom and godliness appear, not only in choosing such persons as do entirely love, and will diligently promote the common good, but also in yielding unto them all due honor and obedience in their lawful administrations; not beholding in them the ordinariness of their persons, but God’s ordinance for your good; not being like unto the foolish multitude, who more honor the gay coat, than either the virtuous mind of the man, or glorious ordinance of the Lord. But you know better things, and that the image of the Lord’s power and authority which the Magistrate beareth, is honorable, in how mean persons soever. And this duty you both may the more willingly, and ought the more conscionably to perform, because you are at least for the present to have only them for your ordinary governors, which yourselves shall make choice of for that work.

Sundry other things of importance I could put you in mind of, and of those before mentioned in more words, but I will not so far wrong your godly minds, as to think you heedless of these things, there being also divers among you so well able to admonish both themselves and others of what concerneth them. These few things therefore, and the same in few words I do earnestly commend unto your care and conscience, joining therewith my daily incessant prayers unto the Lord, that He who hath made the heavens and the earth, the sea and all rivers of waters, and whose providence is over all His works, especially over all His dear children for good, would so guide and guard you in your ways, as inwardly by His Spirit, so outwardly by the hand of His power, as that both you and we also, for and with you, may have after matter of praising His name all the days of your and our lives. Fare you well in Him in whom you trust, and in whom I rest.

An unfeigned well-willer
of your happy success

in this hopeful voyage, J. R.

One Reply to “Pilgrims in a Strange Land”