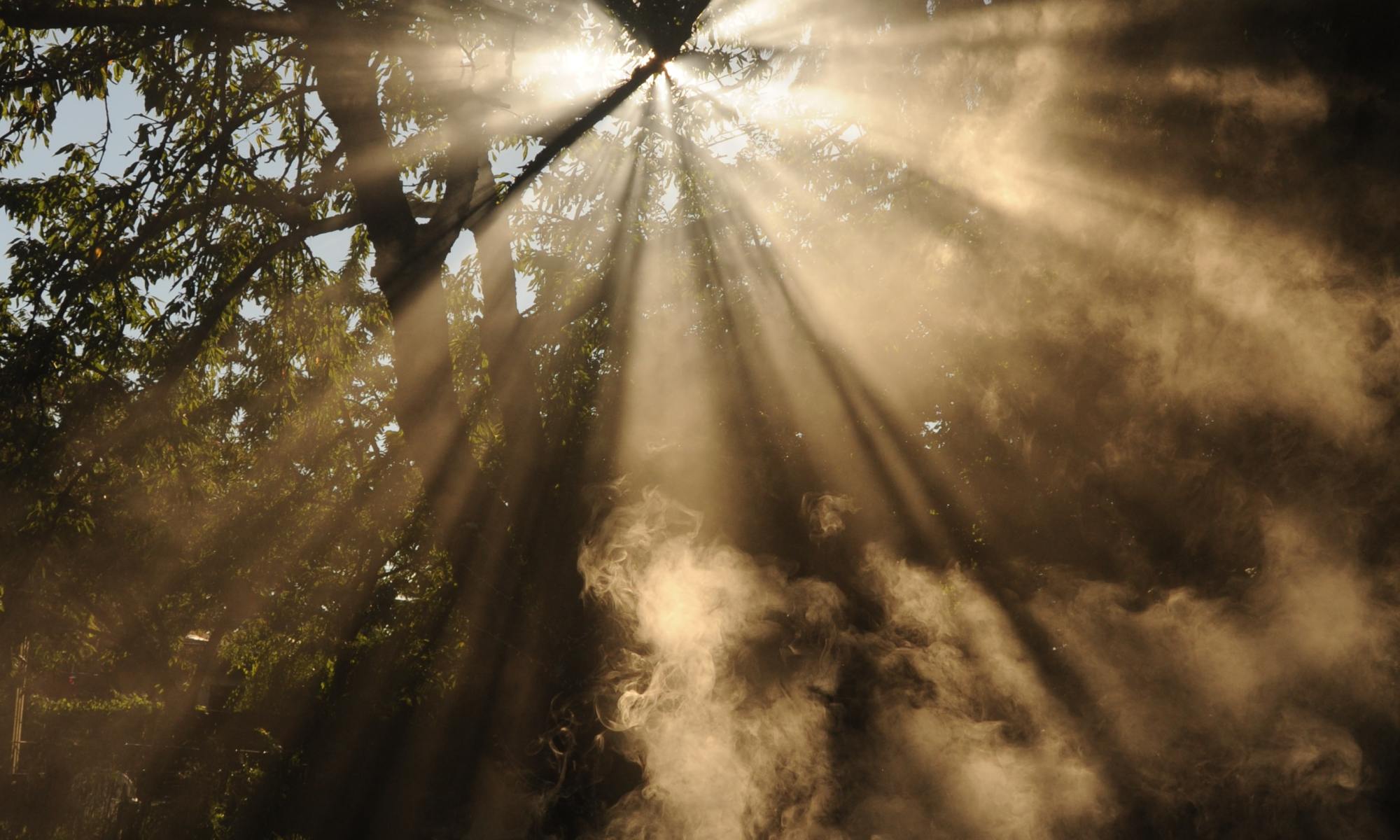 It is said that in the fall before Halloween and through the following weeks into December, the veil is thinner between the spirit world and the physical world. Followers of the new age, Wiccans, Satanists, witches and other flavors of spiritism embrace the revelry of pagan celebration, hoping to tap into the energy and spirits that seem more accessible during this spiritually charged time of year.

Some, who call themselves light workers, claim it is a time of cleansing and renewal. Others, who work in the so-called “darker arts” spend time casting spells, curses and send sending spirits to cause trouble for Christians or enemies- political or otherwise.

So, what are Christians to do during this time? Are we to live in fear? Are we to be incredulous, doubting that anything supernatural really exists of that magnitude? Do we believe that Satan has no power, because of the cross? Where is our position? What should we do, if anything at all?

First of all, last year in 2019, I received many calls and texts of distress in the week leading up to Halloween. It seemed surreal, as sincere believers in Jesus recounted to me experiences of physical harassment, relationship distress, trauma beyond belief, tragedy, strange happenings in their homes that couldn’t be explained, seeing supernatural beings in their homes, nightmares and the list goes on. What is happening? Why is it happening? What can or should we do?

Well, last year, I began to ask God these questions, these are the things he has brought to my attention.

“But even if we, or an angel from heaven, preach any other gospel to you than what we have preached to you, let him be accursed.”
‭‭Galatians‬ ‭1:8‬ ‭NKJV‬‬

You see, before Jesus the Messiah came to earth, there was a veil over the spiritual hearts of the people of God and a veil over the holy of holies in the temple of God. The holy of holies was the place where the sacred things of God were kept. The golden ark of the covenant, guarded over by two cherubim angels and filled with the testimonies of God’s people was so holy that if anyone touched it he would die instantly. God himself is so powerful and so much more pure and holy than us that he had a special place in the temple he would live, where only a high priest, purified and cleansed could enter once a year on behalf of the people of Israel. If he went into God’s presence in an unworthy manner, he would also die instantly. Basically, unpure things cannot stand in the presence of a holy God.

But, Jesus was the perfect high priest, holy and blameless before the Lord. Fully God and fully man, he came to earth to make a way for people to have the true light – a light that shines in the darkness- a light that no darkness can overcome. In order to do this, he became a sacrifice, to cleanse those who believe on him from the dark blot of sin and to remove all spiritual impurities by taking our punishment through his death on the cross.

The prophecies written 700 years before Jesus was born, were fulfilled on the day Jesus died on the cross. Isaiah 53 prophesies that the coming Messiah was wounded for our transgressions – the things we didn’t even know that kept us from the Lord. It says he was bruised for our iniquities – for our direct rebellion against God. The punishment that brought us peace was upon him, and by his stripes, we are healed.

On the day the prophecies were fulfilled, the veil in the temple was ripped from top to bottom – forever making a clear way for people to enter directly into the presence of God. Our very sin that endangered us in his presence was removed by the blood of the perfect sacrifice Jesus Christ. No blood sacrifice has more power that the power of the blood of the son of the living God.

The fact that the veil was ripped from top to bottom shows who ripped it – the hand of God did. Josephus reported that the veil was 4 inches thick, was renewed every year, and that horses tied to each side could not pull it apart. (Ryrie study Bible note.)

But, God. The mission of the living Creator of the universe is to have a direct relationship with his people. He made a way for us to have direct access to him through the death of his son. We can confidently, with freedom, walk into the throne room of grace anytime of the night and day. Christians don’t need special holidays to access the power of God. We can access it all the time. So, we need to ask ourselves, why don’t we?

I will not contend or pretend that evil is not unleashed this time of year. I will not act as if the devil has no power, but what I will contend is this: Why do those who love Jesus not as eagerly revel in the fact that their veil is completely torn? We have direct access to the throne of the living God, who views us not as pawns or subjects, but as dearly loved children. He is simply waiting for his children to come into his presence for all that we need from him.

He is waiting to bring peace that lasts and is not for a fleeting moment of time. He is waiting to bring healing, to bring revelation, to bring power, to bring help in the time of need, but why do we not seek for it? Why do we not enter in every single day of the year? Perhaps, we think, “If God wants to do something in my life, he will just do it?” Or perhaps some think, “I have been saved by grace through faith. I don’t need to pray or fast. I don’t need to be legalistic. God just wants me to rest in him.” Listen up – God calls us to rest from works and striving for our salvation, but he has created us to do exploits (Daniel 11) and to do good works, which he created in advance for us to do. He doesn’t save us to be spiritually lazy, but to be more than conquerors through Jesus Christ our Lord!

Take a look at this amazing passage in 2 Corinthians 3:7-18

The Greater Glory of the New Covenant

Therefore, since we have such a hope, we are very bold. We are not like Moses, who would put a veil over his face to prevent the Israelites from seeing the end of what was passing away. But their minds were made dull, for to this day the same veil remains when the old covenant is read. It has not been removed, because only in Christ is it taken away. Even to this day when Moses is read, a veil covers their hearts. But whenever anyone turns to the Lord, the veil is taken away. Now the Lord is the Spirit, and where the Spirit of the Lord is, there is freedom.  And we all, who with unveiled faces contemplate the Lord’s glory, are being transformed into his image with ever-increasing glory, which comes from the Lord, who is the Spirit.”

Not only is the temple veil torn- we are now the temple of the Holy Spirit. We have the Lord in us and working through us everyday and every night. We are never alone. We can be filled with him and filled with power to the glory of God the Father. Our spiritual eyes and ears can be unveiled and opened by the Spirit of God to hope, to power and to belonging in the family of God. We can be participants in miracles, in changed lives, in healing, and in hope. Those who participate in darkness may find some power momentarily in this time- but we can enter the throne room of grace with confidence all the time.

There is really no comparison between the thin veil of the father of lies and our good Father who unveils himself and invites us to enter into his throne room. We do need to enter in with repentance and attitudes of humility. And, as our bodies are the temples of the Holy Spirit, I highly recommend abstaining from all things that desecrate the temple of the Living God and treat it as an unholy thing. Doesn’t the scripture say, “Touch not an unclean thing?” As believers, we should not have anything to do with the fruitless deeds of darkness. (Ephesians 5) Are you trying to find power in the occult or are you going straight into God’s throne through Jesus Christ our Lord?

Today, one of the elders at our church reminded us that Jesus Christ himself, when he was on earth, could not do many miracles in Nazareth, because the people had no faith. Are you someone who doesn’t believe God wants to do great works in your life? Do you live in a lot of doubt? If you struggle with unbelief, ask the Lord to help your unbelief. We have all the power of God at our disposal, but sadly many believers do not even believe that is true.

Remember, you may see the strange and dark things happening in the world – especially during this time of year. But, if you have faith in Jesus to be Lord of your life and forgive your sins- the veil between you and the living God of light is torn 24 hours a day, 7 days a week 365 days a year. Go into the presence of the creator of the universe with confidence in Jesus Christ our Lord. Go in with prayer. Go in with repentance. If you have celebrated in this season and participated in the occult and darkness, repent. If you have celebrated death or evil for fun- repent. Ask the Lord to forgive you and rebuke Satan’s power over your life, because of what your involvement in the occult in Jesus’ name. Go out with the Holy Spirit and be filled up for a victory! God will not reject anyone who repents and comes to him with a sincere heart. He delights in forgiving, healing and delivering.

…P.S. This year- many of my friends- the people of God have been going into the presence of God with fervency and fasting- due to the distress of the year. The spiritual battle is one of victory- not distress. We need to stay in his presence- behind the torn veil through the blood of Jesus. Stay the course and suit up in your armor and authority in Christ for this coming end of the year.

Photo by Wonderlane on Unsplash

2 Replies to “Their Veil Is Thin, Our Veil Is Torn.”